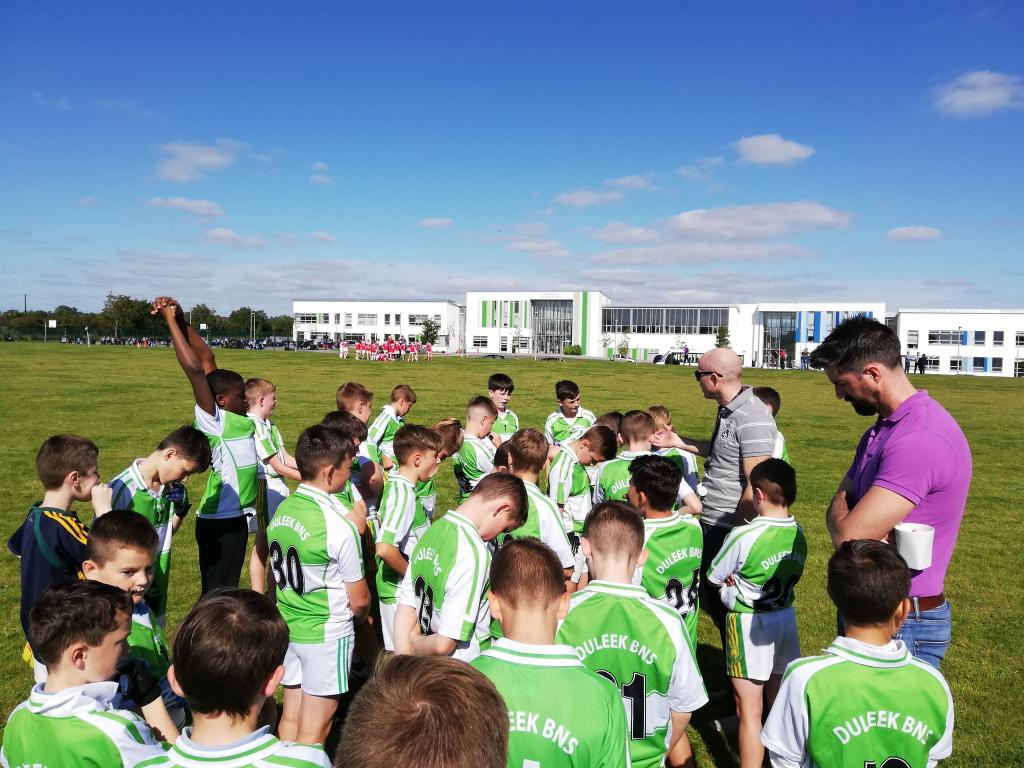 Duleek B.N.S have a proud record of playing Gaelic Football and over the years many pupils have enjoyed improving their skills, playing in class leagues and representing the school in various competitions.

Structured coaching usually begins when the boys are in second class and they play in the school leagues from third class to sixth. Senior boys help with coaching and refereeing which is a great help during the leagues.

The main competition that the school play in each year is the Meath Cumann Na mBunscol Leagues, in which they have a very proud record. The school won its first title (Div II) in 1982 and then did not appear in a final again until 1993. Although they were defeated in that final it was the beginning of a glorious era for the school and they went on to play in eleven consecutive Div II finals- winning five in 1994, 1997, 1998, 1999 and 2002.

Due to the increase in numbers the school now play in Div I and in 2010, 2011 and 2012 won their regional finals and qualified for the semi-final. Unfortunately, they were defeated in all three semi-finals, on each occasion by the eventual winners. In 2013 the school team were defeated in a play-off for a semi-final place in Div.1 of Meath Cumann Na mBunscol.

In 2014 Duleek B.N.S. took part in the Cooney Cup.This was a new competition set up for Primary Schools in East Meath and after a great run the school were eventual winners defeating St. Mary’ Parish School, Drogheda. in the final. The final was played in Páirc Tailteann Navan.

In November 2014 the school team reached the Cumann Na mBunscol Div 1 Shield Final. This game was also played Páirc Tailteann Navan and Stamullen were our opponents. Both teams were unbeaten coming into the final but Stamullen proved themselves to be a better team on the day and were comprehensive winners.