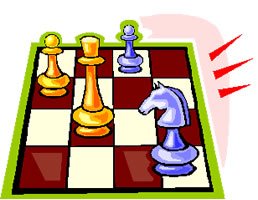 Boys meet for Chess Club with Mrs. Levins at lunch time each week. ( Number of participants is limited to 40.) To encourage competition the boys are ranked on a chess ladder from numbers 1-32. Each boy on the chess ladder may challenge a boy who is one to three places above him on the chess ladder. If the challenger doesn’t achieve a checkmate, the players positions remain the same. However, if the challenger achieves a checkmate, he moves up to the ladder position of the boy he challenged and any intervening boys drop down one place.

At some stage during the year there is usually a chess blitz where play is intense over a whole school day. To encourage team participation, a competition is run in the school called ‘Battles on the Chessboard’. We also play in the Drogheda Primary Schools Chess League where matches are played both at home and away venues.